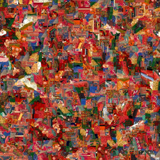 "Oneiromancy (the art of foretelling the future through dreams) is an hypnotic ambient journey through the underworld of the unconscious and the dreams which abide therein."
--K.M. Krebs

Originally a CD-R release, this ambient trek by Canadian sound artist K.M. Krebs is now a netlabel release on Webbed Hand. Distinguished not only by the remarkable sounds herein, but also very evocative track titles, complemented by detail-rich cover art, this is the sort of album one can spend a lot of time listening to and reflecting on.

Lest I risk redundancy though, allow me to direct your attention to the review in the "Notes" section of this page (below), which describes the album better than I could.

K.M. Krebs has become a well-known and respected artist in the netlabel scene. As K.M. Krebs he recorded the classic "Halberd of Chemistry" (available at Fukk God Records), and as 833-45 he recorded "Solar Cycle 23" which is a popular release at Autoplate Records. Check out the numerous other netlabel and CD-R releases in his discography at http://www.833-45.net/

With 'Oneiromancy' we seem to shift into the world of dreams suggested by the title (using dreams for prophecy). Again, there is a beautifully seamless mix, each track extending into the next, and themes seeming to recur. The voice is present, but more distant, less frequent, subsumed into the dreamscape. The 'Vapour of immense extent' and 'The seven canons' form balancing counterpoints for this excursion - they are based around ambient samples with dark tones: water, walking, rumbles and cars in the first; birds, water, shouting in the second. The anchors of the realworld from which the dream suspends.

The body of the album is a hypnotic exploration of dense and complex tones and drones: 'The approach of rust' exemplifying it with ringing dramatic tones underscored by a woobling which gradually settles down; the clatter of a multitude of shopping trolleys, shifting to a gentle crackling running water with cycling tones in 'Emperor of cartography'. Shifting ebbs and flows of 'Between the firmament and our earth' with distant voices that become a crowd, buzz saws that come and go, in a static play with tones that is always moving towards its shuddering echoed end. The tone from that continues into 'The evaporation of numberless subjects' where it becomes more voicelike and plies beside some chattering, strings and pulsing: a knocking noise, horn blows and a vent blows through into 'In a warm room facing south' which rumbles with water, swirling tones and waves.

'Metallic kingdom' layers metal tones into a choir, and adds pulses into a deep sensual slow piece, the watery end opening 'Moisture of metals' (the plane I heard here was actually outside but fitted in perfectly) becoming an organ, more rumbling, higher tones and ringingstrike pushing it forward. The slow ringing is taken up by 'The testimony of the sea' that is joined by a pulsing chant and shimmering tone, with more voices in it. The light tone of 'Bruising of the serpent's head' is overlaid by a big reverberating deep one with little ringings inside, occasional pulses of voice are subsidiary elements, shifting into a woodblock percussion that then underlies 'Concealing the great stone' which also features echoed voices and an orchestral drone that slides into the waters of 'The seven canons'.

A different environment to the 'Solar Cycle 23', depending on a richer tonal base, more stability and a certain lightness. Both are excellent albums with depths, secrets and entertainment aplenty.

Reviewer: KOBUN - favoritefavoritefavoritefavorite - October 10, 2007
Subject: Kevin
Mostly very familar and fairly prosaic but for two outstanding tracks: 'In a warm room facing the south' which has a fabulous wasteland-synth noise which wails around a huge droning mass that pulsates every now ang again. Its emotional and extremely melancholic.
The second is 'Metallic Kingdom'which has a dreadful fantastical title but some incredibly dark slices and screeches of synth like moaning metal and a churning bassline which developes into something black as night.

Reviewer: shamefile - favoritefavoritefavoritefavoritefavorite - February 24, 2005
Subject: Awe inspiring
Krebs rarely disappoints in offering sparse dark ambient music that is in a league of its own. Set apart from the masses of other dark ambient exponents, Krebs populates his sound pieces with space and haunting sounds that inspire visions of deserted ruins echoing with events that tranpired long ago, yet leaving echoing memories in their place. Download this now.